Shining a light on brain function

Try to imagine that we can simply turn on and off certain brain areas just with the flick of a switch. Try to imagine that we, with that switch, can turn on or off the areas in the brain that are involved in fear, thirst or motivation. This switch exists, and it happens to turn on a light inside the brain of a test animal, in a technique called optogenetics. With the development of this technique, neuroscientists have again come a step closer to understanding what the brain does and how it does it. Now, with financial support from the Norwegian Research Council, this technique has come to the University of Tromsø to study which specific brain projections are involved in natural reward.

In this experiment blue light expressed in the subfornical organ causes the mouse to drink, even when it already is satisfied. As soon as the light is turned off, the mouse stops drinking (Oka, Y et al. 2015. Nature 520, 349–352).

From algae to viruses to light-sensitive brain cells

Billions of brain cells (neurons) form the network that governs how we perceive the world, how we think and what we do. The neurons in that network communicate with each other by passing on chemical and electrical signals. If a neuron is activated, it rapidly becomes less electrically charged and an action potential is produced (it “fires”), that travels along the neuron to its end, where it can activate, inhibit or modulate another neuron.

If we want to influence (collections of) neurons, we need to be able to interfere with when and how they fire. With previously existing techniques, we could only lesion (inactivate) brain areas, or inject drugs that changes the way a cell behaves, but these techniques are not precise, and there is little control over timing.

Building on previous work done by Miesenbock, Hegemann, Nagel and Bamberg, Karl Deisseroth managed to express channelrhodopsin in cultured neurons. Channelrhodopsin is a light sensitive ion channel that opens when it is exposed to blue light, which causes positive ions to pass through. In neurons, this will depolarize the cell and make it “fire”. This light sensitive channel was originally isolated from algae, in which it makes the algae move towards light.

To get the light sensitive channel into the membrane of the cells, the DNA of a virus is modified so, that it contains DNA that codes for channelrhodopsin. This virus is then injected into a specific brain area, where it infects nearby neurons. These infected cells will incorporate that DNA into their own DNA and start producing the ion channel as if it was their own. Next, a thin optic fiber attached to a light source is implanted in the same brain area. When the light is turned on, these brain cells will fire. With the light turned off, cells immediately go back to their resting state.

Nature methods called optogenetics the “method of the year” in 2010 and made this video about it.

In addition to channelrhodopsin, more of these light sensitive channels have been developed, some of them with the opposite effect. Halorhodopsin for example, is a channel that pumps (negatively charged) chloride-ions into the cell, which causes the cell to hyperpolarize (charged even more). When the light is turned on, these neurons are prevented from firing.

What are we going to do with optogenetics in Tromsø?

The reward system in the brain is an essential element involved in motivation and responsible for many of our behaviors. A pleasant feeling that coincides with a certain behavior (pattern) makes us want to repeat that behavior, while we avoid those actions that had a less desirable outcome. Disturbances in the reward system can result in a wide variety of disorders. Addiction, obesity and obsessive-compulsive behavior are related to an overactive reward system, while anhedonia and sexual dysfunctions might result from a lack of motivation.

Most research on the functionality of this reward system uses unnatural, external factors like cocaine or alcohol. In this project, we use sexual behavior, which is more natural, to study motivation and reward.

We can study the different stages of sexual behavior with several behavior tests. One is called the sexual incentive motivation test. The male rat of which we want to study the behavior is let loose in a rectangular box. Attached to this box are two smaller boxes, separated from the big box only by a wire mesh. One of the boxes contains a female rat, the other a male rat. The rat we study can see, hear and smell the other rats, but cannot reach them. This way we can see whether the rat spends more time near the female or the male, but also whether the rat is interested in the other rats at all. Another test is the copulation test, where the studied male rat is free to (sexually) interact with a female rat.

Before we study the behavior of the rat, we inject virus containing DNA for light sensitive channels in a certain brain area. Because of the properties of the virus, we are able to infect only a specific subset of neurons, which then will become light sensitive, all the way down to the brain areas they are connected to. Because brain areas form complex networks, and we do not want signals that take indirect paths to the other brain area we are interested in, we implant the optical fibers in the last area. If we turn on the light, and we see a change in behavior, we know it is only because of the direct path between these two areas has been influenced (see figure below). This way, we can analyse how certain brain areas, and even specific subsets of neurons, are involved in the behavior we are looking for.

The goal of our research is to investigate which pathways in the brain are involved in natural reward, and to discover the role of the communication between brain areas in this perspective. It is meant to unravel the complexity of the natural reward system, measured by sexual motivation and behavior, in order to generate a better understanding that hopefully can be applied to humans. 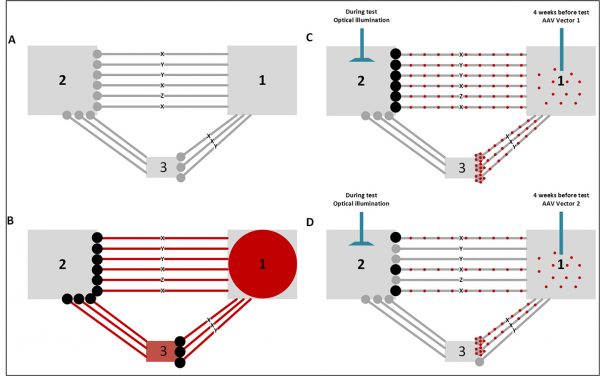 A) Brain area 1 projects directly to area 2. But area 1 also projects to area 2 indirectly, e.g. via area 3. B) Older techniques, e.g. lesions in brain area 1 disrupt the neural projections to area 2 (big black dots), in addition to disruption of the projections to area 3. Because area 3 is thereby affected, the projections from area 3 to area 2 are disrupted as well (big black dots). C) Optogenetics is more specific and affects only the direct pathways. Injection of virus in brain area 1 will induce the expression of light sensitive opsin channels in all neurons (x, y, and z) originating in this area (red dots). Activation of opsin channels by light during the test, has an effect on only these neurons. Illumination of area 2 will only activate/inhibit the neurons originating from area 1 (big black dots). The neurons from area 3 to area 2 do not have light sensitive channels and are not affected by light.